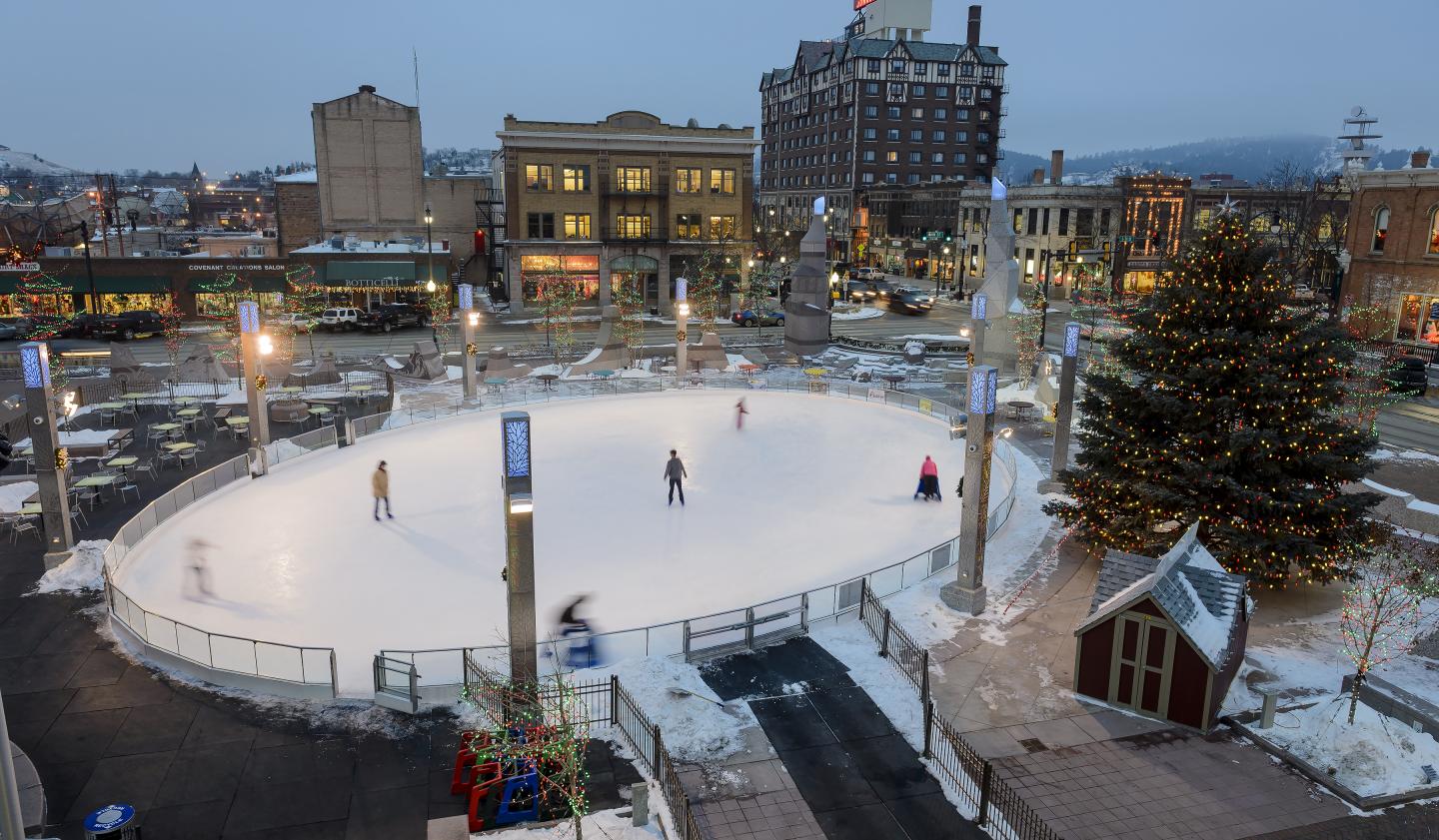 Here, winter sports have become a way of life. From ice-fishing to snowmobiling to cross-country skiing – there’s no shortage of fun to be had when the weather turns frosty. But of all the snow-centric sports South Dakota has to offer, few are as beloved as ice skating and hockey.
Throughout South Dakota, in community’s large and small, ice skating is a favorite pastime and an integral part of local culture.  Whether you’re looking to spectate or participate, many of South Dakota’s indoor and outdoor rinks offer skating lessons, hockey games and open ice time.

Main Street Square in Downtown Rapid City
From late November to early February every year, Rapid City’s Main Street Square becomes one giant rink where locals and visitors gather to skate, shinny and celebrate. Decorated to the nines with festive lights and a towering Christmas tree, the Square makes it impossible not to get into the holiday spirit.

Group skating is open to the public seven days a week and on select weekends you can even take part in local traditions – like the Ugly Christmas Sweater Skate Party and the annual RCPD vs. RCFD Broomball Benefit Game.

The Rapid City Rush
As the pride and joy of South Dakota hockey fans, the Rapid City Rush is a professional team in the East Coast Hockey League. Just one year after being founded, the Rush won the Conference Championship during the 2009–2010 season and were the Division Champions the following year. You can catch the Rush during home games at the Rushmore Plaza Civic Center downtown. 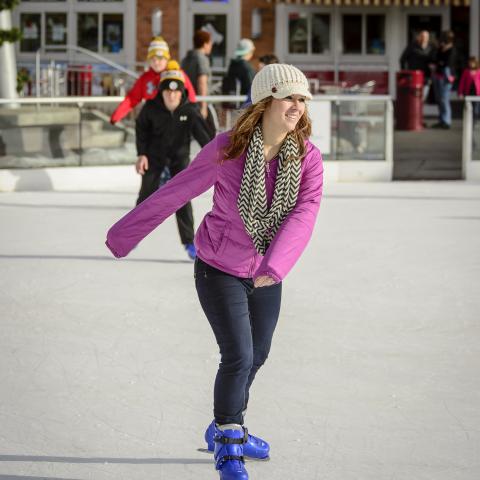 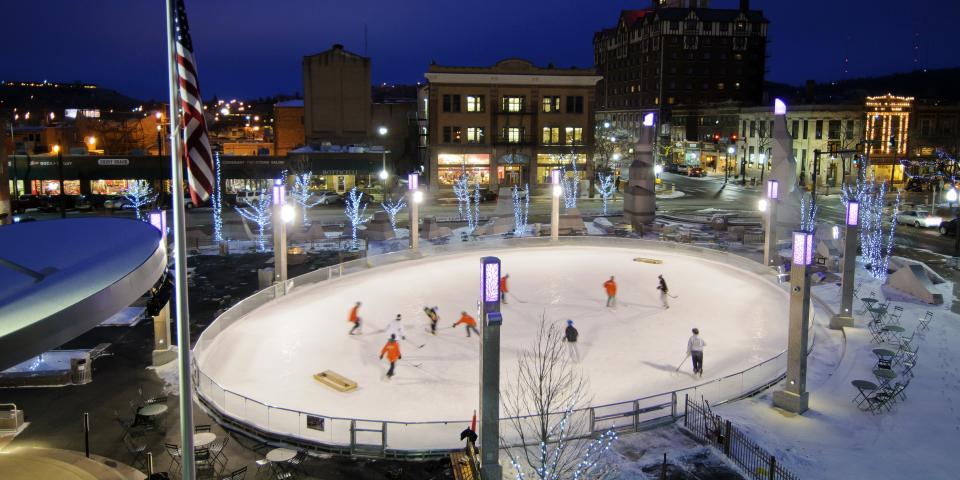 Pierre Area Youth Skating Association (PAYSA)
This youth club located in Pierre, the state's capital city, is a shining example of how skating and hockey can bring people together and reinforce the bond of community. The association believes that pursuing excellence in academics and sports helps develop maturity and self-confidence.

PAYSA offers year-round public skating plus courses in hockey, broomball, curling and figure skating for all ages and skill levels.

Sioux Falls Stampede
If you don’t recognize the Stampede by its fierceness on the ice, you’ll know the team by the roar of its loyal fan base. This Tier I junior hockey team in Sioux Falls not only holds three playoff championship victories, but they've also seen several players move on to the NHL. To catch the Stampede, look no further than the Denny Sanford Premier Center – a brand-new multi-use arena that holds 12,000 people in the heart of Sioux Falls.

Scheels IcePlex in Sioux Falls
Located in the Sanford Sports Complex, right next to the Stampede’s home turf, the Scheels IcePlex offers open skating from November to April. Or, if you want to go stick to stick on the ice, the IcePlex also hosts first come, first serve ice hockey and stick-n-puck games on Mondays, Wednesdays and Fridays.

Ice Arena in Mitchell
An hour west of Sioux Falls in Mitchell, the Mitchell Activities Center is a regulation indoor hockey arena, home to the local high school team, the Mitchell Marlins. However, during a 17-week season every winter, the center opens up to the public for ice skating.

The Aberdeen Wings
In the northeastern corner of the state, hockey belongs to the Aberdeen Wings. A member of the North American Hockey League, this Tier II junior hockey team was founded in 2010 and its home games are played at the Odde Ice Center in Aberdeen.

The Brookings Blizzards
An hour north of Sioux Falls, the Brookings Blizzards help young hockey players develop their skills, providing them with college and professional recruitment opportunities. This Tier II junior hockey team is also a part of the NAHL’s Central Division and has recruited up-and-coming athletes from all over the United States. The team plays out of the Larson Ice Center in Brookings and has a 60-game schedule from September to March. The Larson Ice Center also offers open skating and open hockey during the Blizzard’s off-season.

The Bergman Ice Arena in Huron
In 1975, local hockey enthusiasts moved their game from the exposed elements of the outdoors, to the much more favorable circumstances of an indoor arena – becoming the first team in the state to do so. Today, the spirit of hockey is still alive and well in Huron. Visitors are encouraged to visit the Bergman Ice Arena to take part in public skating, figure skating lessons and pick-up hockey games.

Next Up: ICE SKATING & ICE HOCKEY