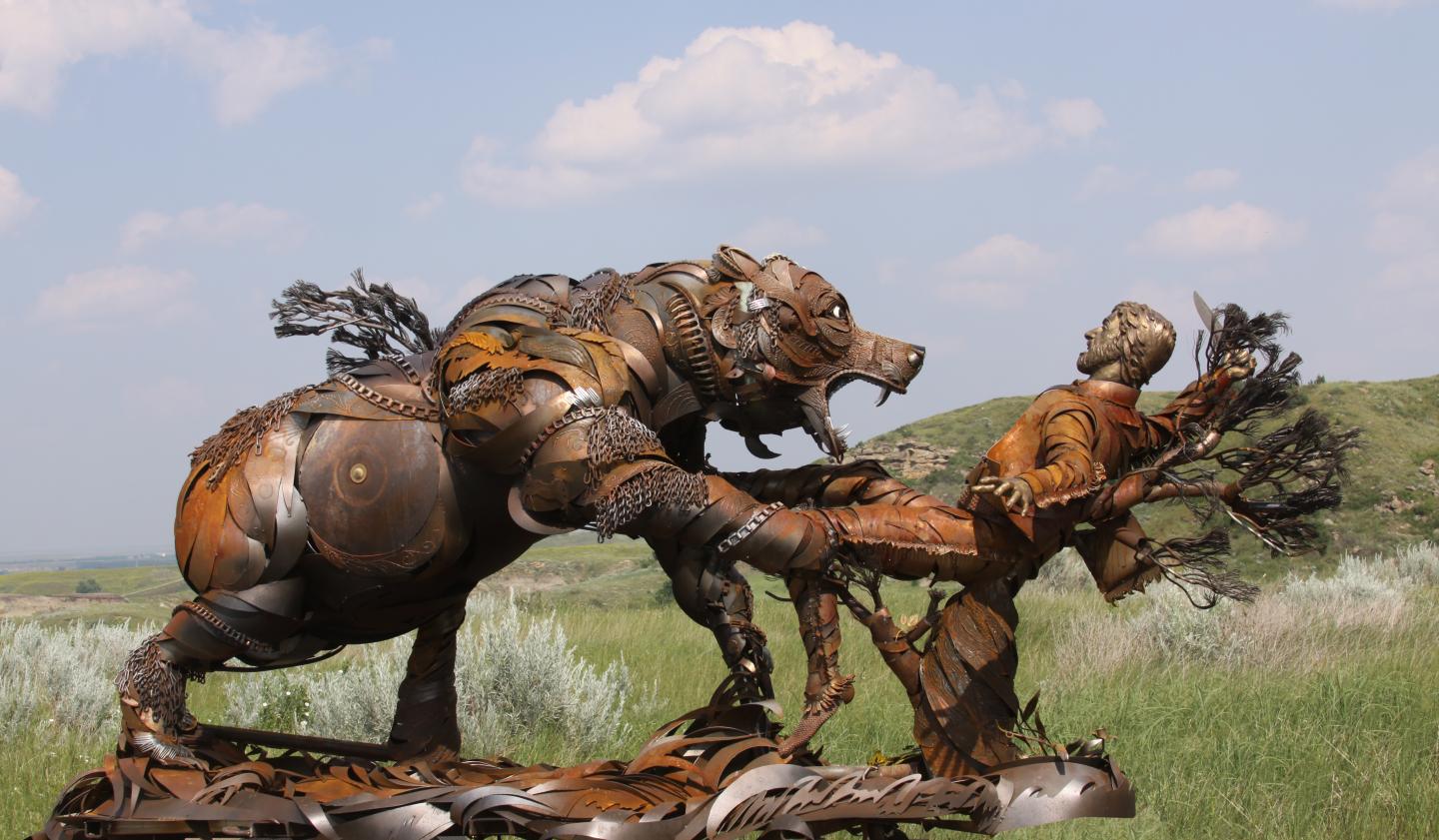 ON THE LAST WEEKEND IN AUGUST, Lemmon-based artist John Lopez unveiled a new sculpture commemorating Hugh Glass, close to the spot where the legendary pioneer nearly lost his battle with an angry grizzly bear. The sculpture — depicting the pivotal moment in the Glass legend — comes at a time of renewed interest in his story,

A film biopic based on Glass’ life is scheduled for release around Christmas [2015]. The Revenant, directed by Alejandro González Iñárritu and starring Leonardo DiCaprio, features the legend of his fight with the bear, his struggle to survive and his quest to avenge the men who abandoned him for dead.

Having grown up in Lemmon, Lopez understands the fascination with the story. “I think [because of] the fact that it happened so close to our hometown of Lemmon, we have all heard the story since we learned about it in history class," Lopez says. "And every time you drive by Shadehill or Summerville, you’re reminded of it. He’s the ultimate survivor.”

The sculpture was unveiled in front of a crowd gathered for the inaugural Hugh Glass Rendezvous at a South Dakota state recreation area also bearing his name, contiguous to the Shadehill Reservoir and Grand River National Grassland.

“Rendezvous” is the name given to a loose network of outdoor festivals for history buffs, where the facial hair and throwback clothing are reminiscent of modern day Brooklyn, but without the irony or the artisanal pickle stand. And for any group that celebrates the pioneer ethic, it would be hard to find a more rugged embodiment of frontier grit than Glass.

“The life that he had even before he was mauled by the grizzly bear, and then to crawl 200 miles after the grizzly attack, puts him in a category of frontiersman where he has a cult following among rendezvous-ers and historians,” Lopez says.

Lopez worked on the sculpture in his Lemmon studio earlier in 2015.

THE VISUAL AESTHETIC LOPEZ HAS EMPLOYED echoes the chaos in the moment. While he incorporates his usual divergent mash-up of found objects, the energy of the piece is in the long flowing plasma-cut strips of sheet metal that form the grizzly, insinuating frenetic movement and fear.

What we know about Glass is steeped in the mythos of the American West. It’s probably impossible to know if he truly ate the half-rotten flesh of the same bear that nearly killed him — or the carcass of a buffalo calf he scavenged from wolves — to make it through the first few days after he was abandoned to the elements.

We know that he already had a reputation in the West as an adventurer — a tall, wiry man who wore buffalo skins and cut his hair with a knife — when he signed up for the “Ashley’s Hundred” fur trading mission, led by General William Ashley of the Missouri militia.

Frederick Manfred described his frontier ambition in the 1954 biography, Lord Grizzly. "The new, the old new, just around the turn ahead, was the only remedy for hot blood. Ahead was always either gold or the grave. The gamble of it freshened the blood at the same time that it cleared the eye. What could beat galloping up alone over the brow of a new bluff for that first look of beyond?”

We know that over a brow of the beyond, near the forks of the Grand River, Glass surprised a mother grizzly with her cubs. How exactly he survived is the stuff of lore, but he did survive, though mutilated and broken. Expedition leader Andrew Henry left Jim Bridger and John Fitzgerald to give Glass a proper burial when he succumbed to the inevitable. The pair dug him a grave, then abandoned him, afraid of being caught in hostile territory. They didn’t have to steal his rifle and knife to leave him even more helpless, but they did.

AFTER THE BEAR FIGHT, his struggle to survive his abandonment is what entrenches the Glass legend in the frontier narrative. Though his memorialization is in some ways an American update on the sacred iconography that has kept the memory of martyrs like Saint Sebastian alive for millennia, Glass parts ways from the ancients. His ordeal is more the consequence of wanderlust than unwavering faith or innocence. Though he would learn virtue later, he's been enshrined in the American memory for brute frontier badassery

His road to Fort Kiowa confirms in an excruciating tableau of hardship and pain what he's made of. Desperately, he employs maggots to eat the dead flesh from his mangled back. Recalling the biblical allegory of Job, without emulating his patience, Glass fights buzzards, wolves and coyotes, eats rattlesnakes, fashions a splint out of bear skin for his broken leg and crawls more than 200 miles.

“Three months of plain hell,” is how Manfred’s Glass describes his torment when he finally arrives. From there, legend says he embarks on a whiskey and hate-filled quest to avenge Fitzpatrick and Bridger. But by the time he finds their trail, the grizzled old mountain man has learned forgiveness, adding a moral component to his fabled resilience.

These scenes have lived in literature, and an obscure western corner of the American conscience, for nearly two centuries. With a new monument by one of South Dakota's most innovative artists — to communicate the raw terror in his defining moment, and his stubborn will to survive — the legend of Hugh Glass is secure in the Grand River forks foothills.

The new sculpture will be on permanent display at the Grand River Museum in Lemmon.

Next Up: The Story Behind the Square