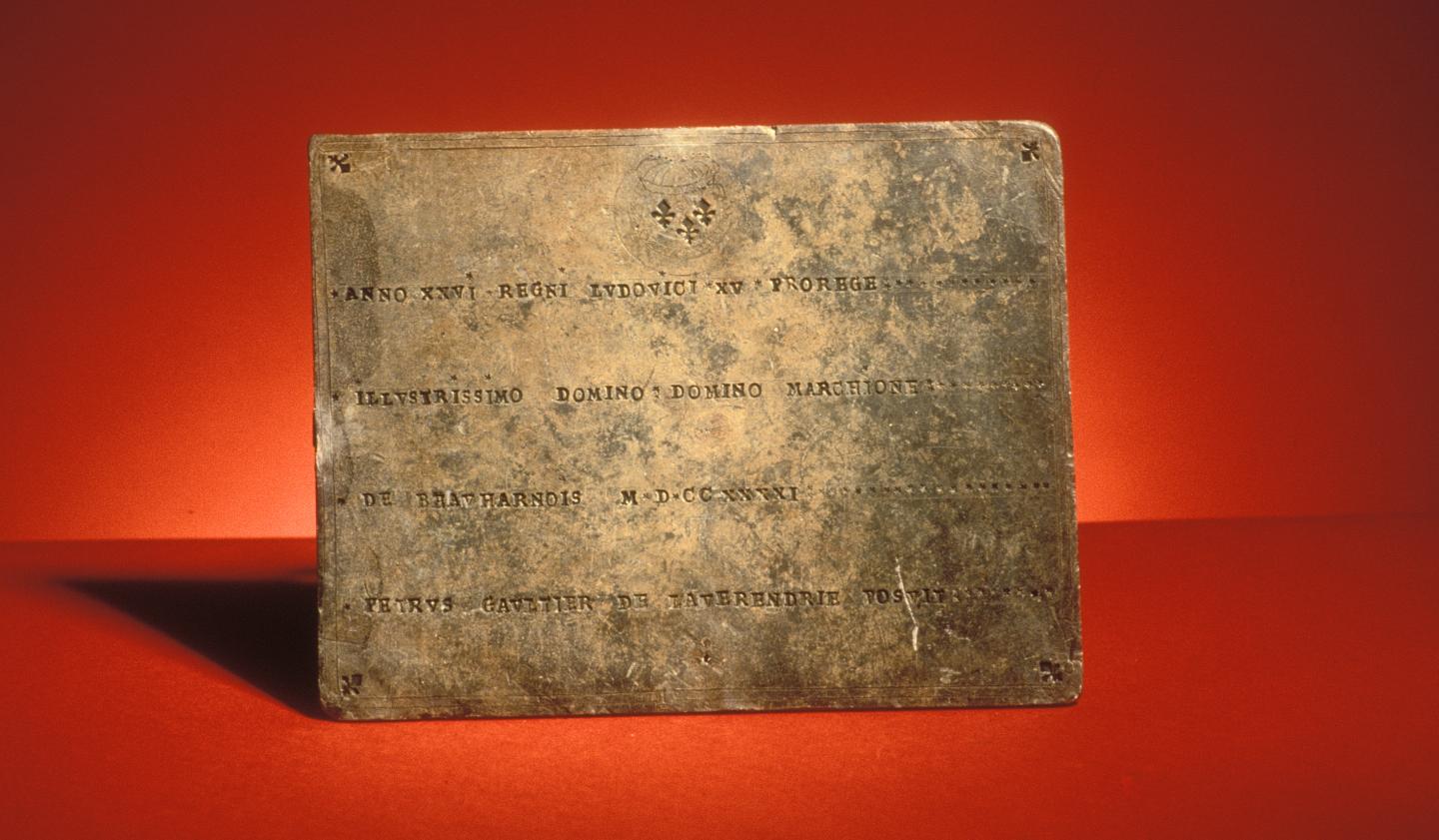 TWO HUNDRED AND SEVENTY YEARS AGO, French explorers named Verendrye buried a lead plate on a hill. They were among the first white men to set foot in a land that would later be known as South Dakota.

One hundred years ago, Ethel Parish and two friends found the plate while playing on a sunny February day on a hill over Fort Pierre. Their discovery caused historians to rethink their accounts of white man’s arrival in this region. The plate captured the imaginations of South Dakotans then, and it has remained one of the state’s most treasured museum pieces ever since.

When we visited her in 1989, Ethel Parish Hepner Roberts remembered the day well. She was enjoying an afternoon outdoors with Harriet “Hattie” Foster and George O’Reilly. “It was a Sunday and it was nice and warm, just a little snow,” she recalled. “Hattie happened to notice something sticking out of the ground. She kicked it with her toe but it wouldn’t budge.”

Their curiosity piqued, the youths dug until they unearthed a flat, rectangular plate. “George scraped off the gumbo with his knife and we saw the writing on it. If we had studied our history, we should have probably known what it was. But we just threw it down and went on playing.”

The three agreed that George would try to sell it for scrap at the local print shop, where lead was always in demand for the hungry letterpress. Fortunately, on his way home that Sunday evening, he crossed paths with two state legislators, Elmer Anderson of Willow Lake and George White of Kennebec. George told them about the unusual plate and together they returned to the hill and brought the mysterious piece to town.

Doane Robinson, superintendent of the State Historical Society, was promptly notified. Mr. Robinson, a noted historian and researcher, had studied and written of the La Verendrye expedition. Almost immediately, he recognized the origin of the dirty tablet.

“On Monday, some men came to our schoolhouse and took us to the Sylvan Hotel in Pierre, where they questioned us about what we found and how we happened to find it,” said Mrs. Roberts. She did not recall who asked the questions, but one of the men was surely the inquisitive Mr. Robinson.

Historians had long disputed the route of the famous La Verendryes. Some claimed the explorers never came as far south as present-day South Dakota, but Mr. Robinson argued that they had. Of course, he felt his version of the Verendrye route was proved by the physical evidence of the plate, which was mentioned in a journal kept during the expedition.

The journal entry states, “I placed on an eminence near the fort (their camp) a tablet of lead, with the arms and inscription of the king and a pyramid of stones for Monsieur Le General; I said to the savages, who did not know of the tablet of lead I had placed in the earth, that I was placing these stones as a memorial of those who had come to their country.”

As news of the schoolchildren’s discovery was publicized in 1913, it rekindled interest in the dramatic events that led to the settling of the West. Since the plate identified a major landmark of the Verendrye travels, historians reopened their files on the exploration. Still, controversy continued. Some said, for example, that the plate may have been discovered in the 18th or 19th century by Indians and moved to the Fort Pierre hilltop.

Mr. Robinson minced no words in responding to that theory. He wrote, "To suggest that this plate might have been planted at a distant point, recovered by Indians and carried to the mouth of the Bad River (at Fort Pierre) there to be fortuitously dropped upon this eminence (Verendrye Hill) precisely complying with the conditions of the record is a refinement of criticism approaching absurdity."

HISTORY BOOKS WRITTEN SINCE that sunny February Sunday in 1913 note that while the Verendryes were probably not the first white men to arrive here — most historians believe French fur traders made brief excursions within the state's borders perhaps as early as 1679 — the three children's discovery provided a marker that symbolizes a new era on this part of the Western prairie.

Finding the plate had little impact on Ethel Parish's young life. It was just another episode in an adventure that began in 1905 when her parents, Ivan and Amanda Rosetta Parish, came from Wisconsin to South Dakota. Her father worked for the Chicago and Northwestern Railroad and he accepted an assignment as stationmaster and track repairman at Teton, South Dakota. After a few years at Teton, Mr. Parish filed as a homesteader on a claim near Hayes. By 1913, the Parish family had moved again, to the cow town of Fort Pierre.

She and her five brothers and sisters enjoyed their freedoms, They picked wild plums, grapes and buffalo berries. They found two coyote cubs and played with them just as if they were dogs, "until they got older and grew mean. One day they just disappeared… imagine my father had something to do with that." She remembered picking wildflowers that grew in the hills — but not the gorgeous blooms on the cactus. "They were untouchable, we learned that." She and the other children watched cowboys load and unload cattle at the stockyards, and one of the men taught her to speak some of the Sioux language. At age 90, she still remembered how to count to ten in the Dakotas' native tongue.

With all the excitement of pioneer living, Ethel Parish didn't give a lot of thought to the lead plate she had found with her friends. Shortly after the discovery, her father moved the family south to Vilas, a tiny Miner County town. She got a job in Bill Hepner's general store and soon their relationship blossomed beyond employer-employee. Bill and Ethel married in 1916 and they honeymooned by auto in the northern Black Hills, at a time when the mountains were not yet accommodating to tourists. Together, they ran the Vilas store, selling groceries, farm implements, hardware and even friction-driven Metz automobiles. Bill was also the postmaster and he operated the telephone exchange. As their four children grew older, they helped run the family business, "especially the candy counter," she chuckled. After Bill died in 1969, Ethel continued to serve as the Vilas postmaster for several years. In 1971, she married Levi Roberts, a longtime family friend. He died in 1974 and she lived alone at Vilas until she moved to the Good Samaritan Nursing Home at nearby Howard in the mid 1980s.

Ethel never saw friends George and Hattie after she left Fort Pierre as a 14-year-old. When the South Dakota State Legislature appropriated $700 to purchase the Verendrye plate from the finders, no one knew where she’d gone. The money was awarded to the others — George received $500, Hattie just $200.

Ethel also lost credit for the find. Although townspeople knew there was a third teenager on the hill, the name was not always remembered accurately and other Fort Pierre youngsters occasionally were listed with George and Hattie. She was not invited to a 1933 dedication in Fort Pierre of a monument marking the spot where she had found the Verendrye plate, nor was she in attendance at a 1943 ceremony marking the 200th anniversary of the Verendrye expedition.

The state's lack of interest in her association with the discovery meant little to her, she said. But when Ethel’s children grew to adulthood and found their mother was not being properly recognized for her role, they told state officials of the mix-up. Today you can see the Verendrye plate that Ethel, Hattie and George found so long ago at the Cultural Heritage Center in Pierre. 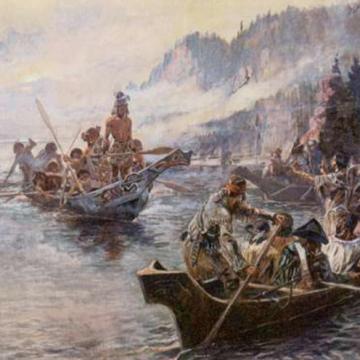 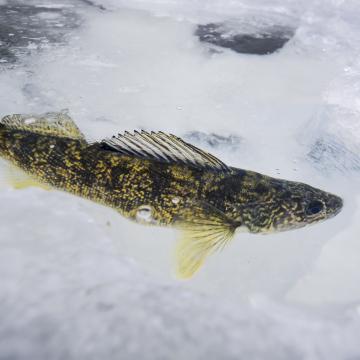 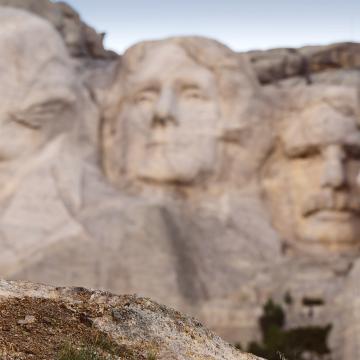 9 Reasons We Should All Be Celebrating South Dakota On #605Day

Thank You for Signing Up for Travelsmart

Next Up: Opening Day