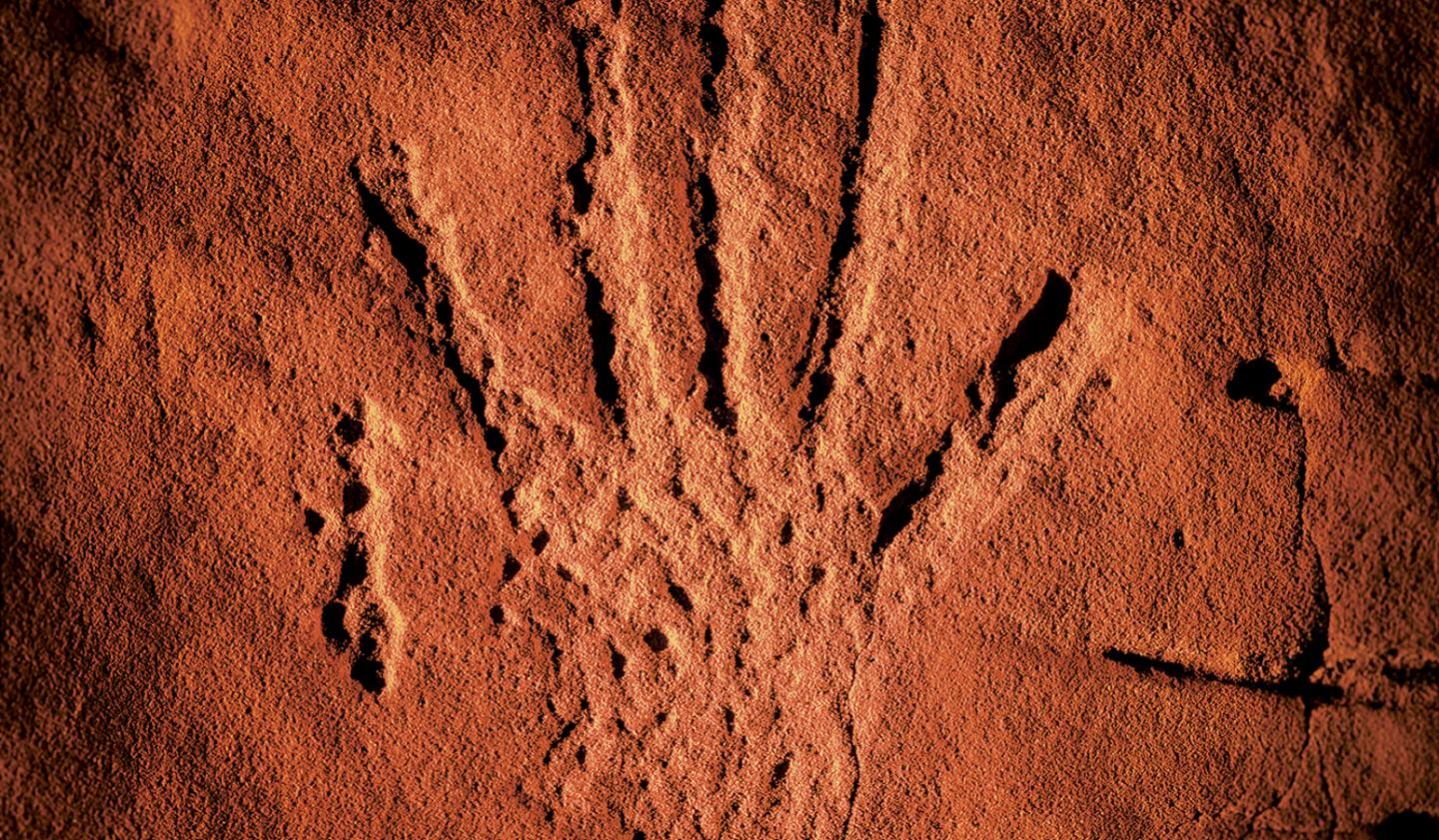 Black Hills petroglyphs provide a glimpse into a prehistoric world

THE HILLS OF WESTERN South Dakota are filled with ancient art that has survived centuries of wind, water and human curiosity. Petroglyphs and pictographs chiseled into sandstone cliff faces and lonesome boulders allow us to see into the worlds of people who lived on the plains thousands of years ago.

Every petroglyph tells a story, though the earliest pictures of zigzags, sunbursts and wavy lines are so abstract it’s impossible to infer their meaning. More recent drawings tell religious stories; a petroglyph in the Cave Hills contains characters from traditional Hidatsa folk stories. They tell of successful deer hunts or battles. Some show people in costume floating above a hunting scene, suggesting that some tribes believed holding a ceremony led to successful hunts. Early Indian people also believed that buffalo and other animals disappeared underground in winter and re-emerged in spring. That’s why some cave openings became particularly sacred places, and feature drawings of buffalo or bird tracks. “They were like shrines where people would go and leave gifts to get the buffalo to come back every year so people could eat,” says anthropologist Linea Sundstrom, the country’s expert on Black Hills rock art. One such location in the Cave Hills was known as a “buffalo home” to Mandan and Hidatsa Indians living along the Missouri River.

Pecking is among the oldest methods of creating rock art. Images of hands are found around the world, but the meaning behind this one, found in the Southern Hills, remains a mystery. 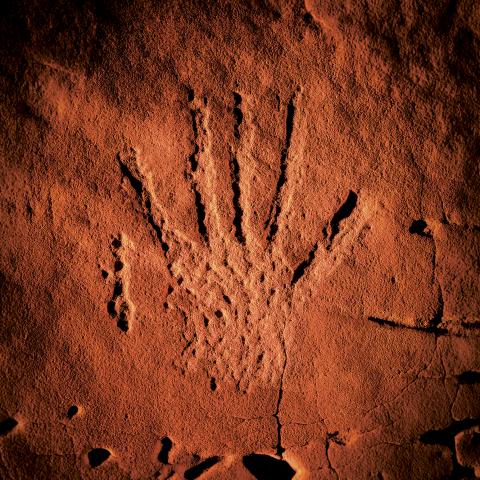 A thunderbird found in the eastern Black Hills is surrounded by an oval, perhaps made by a woman sharpening an awl for hideworking. Both were made within the last 2,000 years. 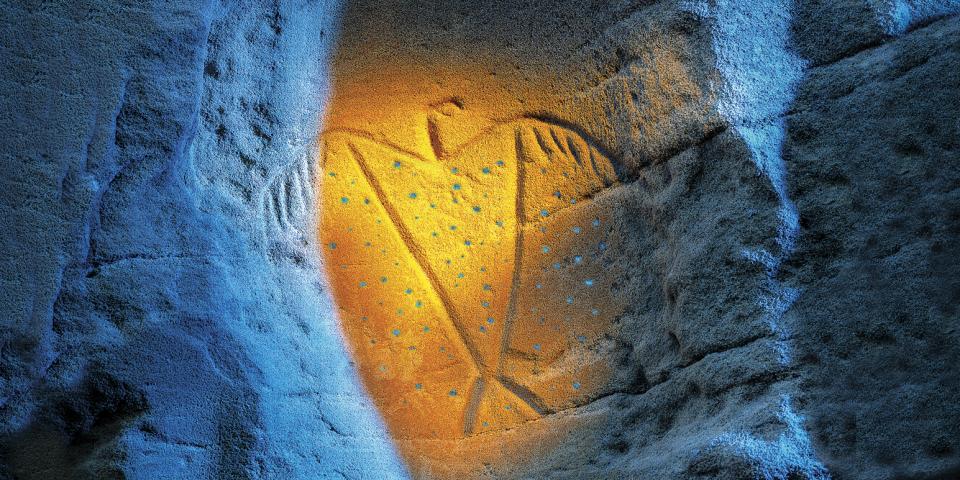 South Dakota’s earliest petroglyphs are 8,000 years old. Determining their age is difficult because researchers need organic matter for carbon testing, but there’s little or none present on rock walls. They can scrape tiny samples of pigment, but any used in Black Hills pictographs has either soaked into the stone or washed away. Instead Sundstrom estimates their age using geologic events. That’s why she places our oldest rock art just a few thousand years younger than the conclusion of the most recent Ice Age. “We’re not seeing mammoths in those drawings, which we would expect to see,” Sundstrom explains. “Early cultures out here were mammoth hunters, so you’d expect to find some of those species that went extinct at the end of the last Ice Age. It does remain possible [that the drawings are older]. They wouldn’t necessarily draw a picture of everything, but my guess is that they are a little after that time.”

Some drawings in the Cave Hills of Harding County are easier to date because they include pictures of horses, which didn’t arrive in present day South Dakota until about 1750. A pitted boulder found near the ancient Blood Run village north of Canton along the South Dakota/Iowa border is consistent with similar boulders found across eastern North America. Scholars believe those are about 2,000 years old.

An elaborate image of a warrior with a large body shield was carved between 300 and 1,000 years ago. Photographer Bill Goehring placed red and blue gels over spotlights to paint color over the eyes and teardrops before snapping the photo. 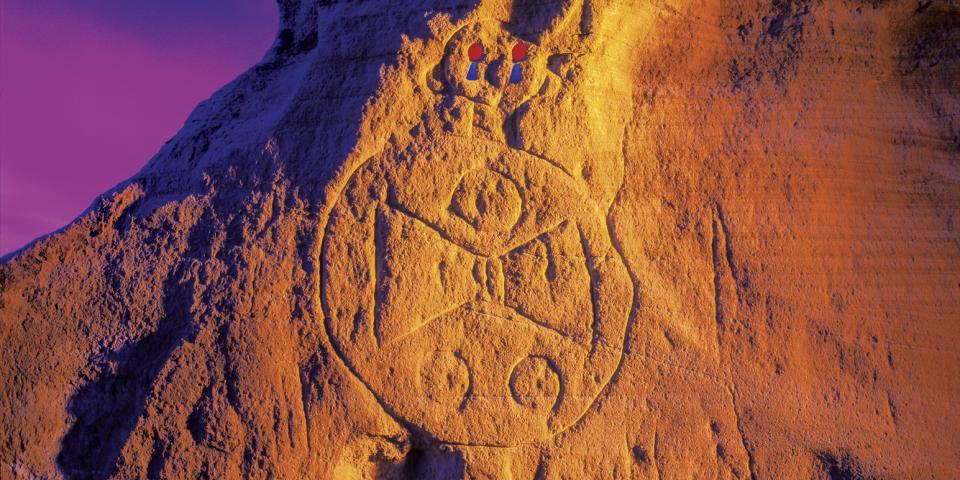 This deeply pecked image of a bear or human foot was created on a shelf of Sioux quartzite, scoured smooth by glacial action in southeastern South Dakota. Its age is unknown, although other footprints found East River date to the last 3,000 years. 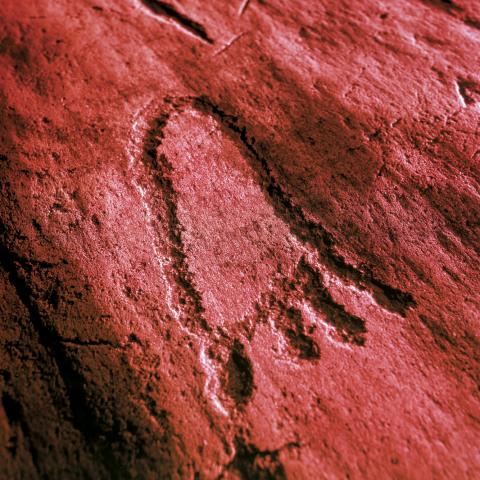 Sundstrom has devoted much of her life to studying petroglyphs. She grew up in Custer, earned a Ph.D. in anthropology and has written books exclusively on Black Hills rock art. She has pored through thousands of historical documents and interviews conducted with Native Americans in the 1800s. Research has taught her not to force meaning into petroglyphs. “There are some people who want them to mean something, so they make something up,” says Sundstrom, an independent researcher and adjunct professor at the University of Wisconsin in Milwaukee. “They try to link it to something they know about from their own cultural experience. I try very hard not to do that. I use just what is in the image itself and put it as much in its cultural context as I can reconstruct.”

Sundstrom’s knowledge of petroglyphs is so extensive she believes she can discern whether carvings were done by women or men. Banana shaped grooves found in rock walls were likely created by women sharpening bone tools used in leather work. “Some of them have only women’s type pictures, some have only men’s and some have each,” she says. “They probably weren’t visiting at the same time, but I think they were visiting the same places.”

There are skeptics who believe modern Native Americans fabricate their connection to petroglyphs. Sundstrom says it’s not true. “These petroglyphs are sacred to pretty much all of the tribes of this area,” she says. “Even if it’s a very early petroglyph that was made thousands of years ago, they still consider that a sacred place, because those ancestors made this alteration to the landscape which they intended to be permanent. That should be respected. We shouldn’t try to modify it or say it’s not important.”

Battle scenes found in the Southern Hills record the brave deeds, or coups, of a warrior with a feathered staff and an eagle feather in his hair. It was drawn after non-Natives arrived, and may refer to the Battle of the Little Big Horn. 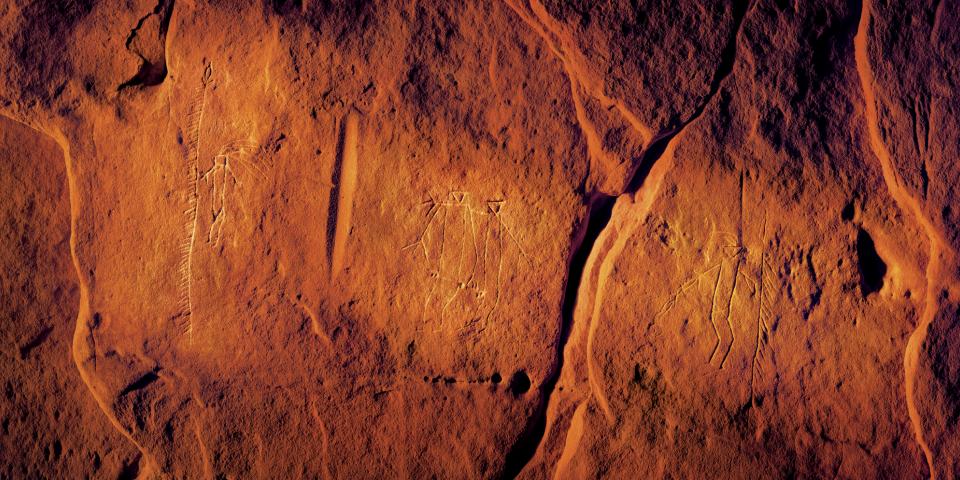 A glacier dropped this boulder along the Missouri River east of Pierre. Native Americans pounded the dimples into it. Boulders with handprints, footprints, bird tracks or pits are scattered around eastern South Dakota and are 1,000 to 4,000 years old. 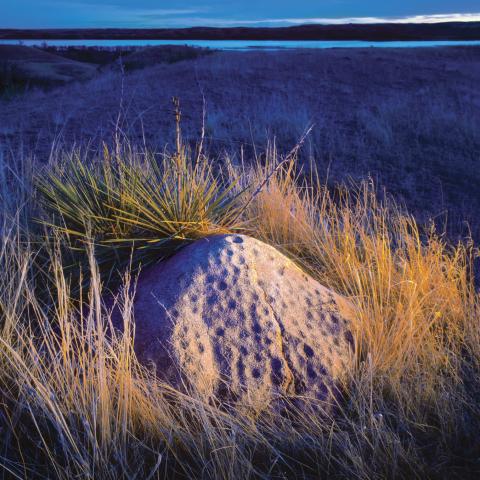 Petroglyphs have survived the elements, but people have always been their greatest threat. In 1874, a Lakota guide directed George Custer’s Black Hills Expedition to cliffs and boulders featuring ancient drawings. Soldiers promptly defaced the art. “JT, July 11, 1874” is scrawled into one cliff face in the Cave Hills. Locals were no more respectful. “Jack and Madge” visited the same spot in 1938 and professed their love by carving a heart with an arrow through it almost on top of a centuries-old shield.

Much of the Cave Hills rock art is on federal land, where simply carving your initials into them can carry prison time. But housing subdivisions and their curious occupants in the Black Hills are encroaching upon many sites. “People think it’s great to go out and draw these things over with chalk or charcoal, but it actually damages the carvings,” Sundstrom says. “You have to think of these as paintings or pieces of art.”

John Koller grew up surrounded by petroglyphs on his family’s 2,500-acre ranch east of Edgemont. “I was told they were there, but as a kid out here, you work,” Koller says. “So when you pick up a rock and throw it at a cow to get it out of a box canyon, you don’t have time to stop and look at these wonderful finds. I crawled around these petroglyphs all the time, but didn’t pay attention.”

In adulthood he began to appreciate the history in which his ranch along the Cheyenne River is immersed. It features two distinct levels of petroglyphs, one dating back 8,000 years and another 2,500 to 3,000 years. He believes a member of Custer’s expedition, maybe even Custer himself, carved “The Explorer” into a sandstone cliff.

About five years ago drought struck the ranch, and Koller was forced to sell his cattle. He started Rock and Pine Adventures, which included three-hour round trip hours of the petroglyphs to supplement his income. Koller closely guided each tour, especially after visitors in 1998 carved their initials into one of the petroglyphs. “The importance of protecting them became more evident,” Koller says. “I never just turned people loose. I would physically be with them so I could explain their fragility. If you mess with them, they aren’t going to last another thousand years.”
Visitors dwindled during the recession, so he returned to ranching full time. He no longer formally offers tours, but if people are curious he may make an exception. “They’re here to share with the world,” he says. “I’m tickled to show them off if I can find the time.”

A large boulder featuring mysterious drawings rested in Spink County sod until it was moved to a new location next to the community center in Tulare (above). Other eastern South Dakota communities feature similarly carved rocks.

Next Up: Walking Wessington Springs

Unique history and history trails wind through this little city