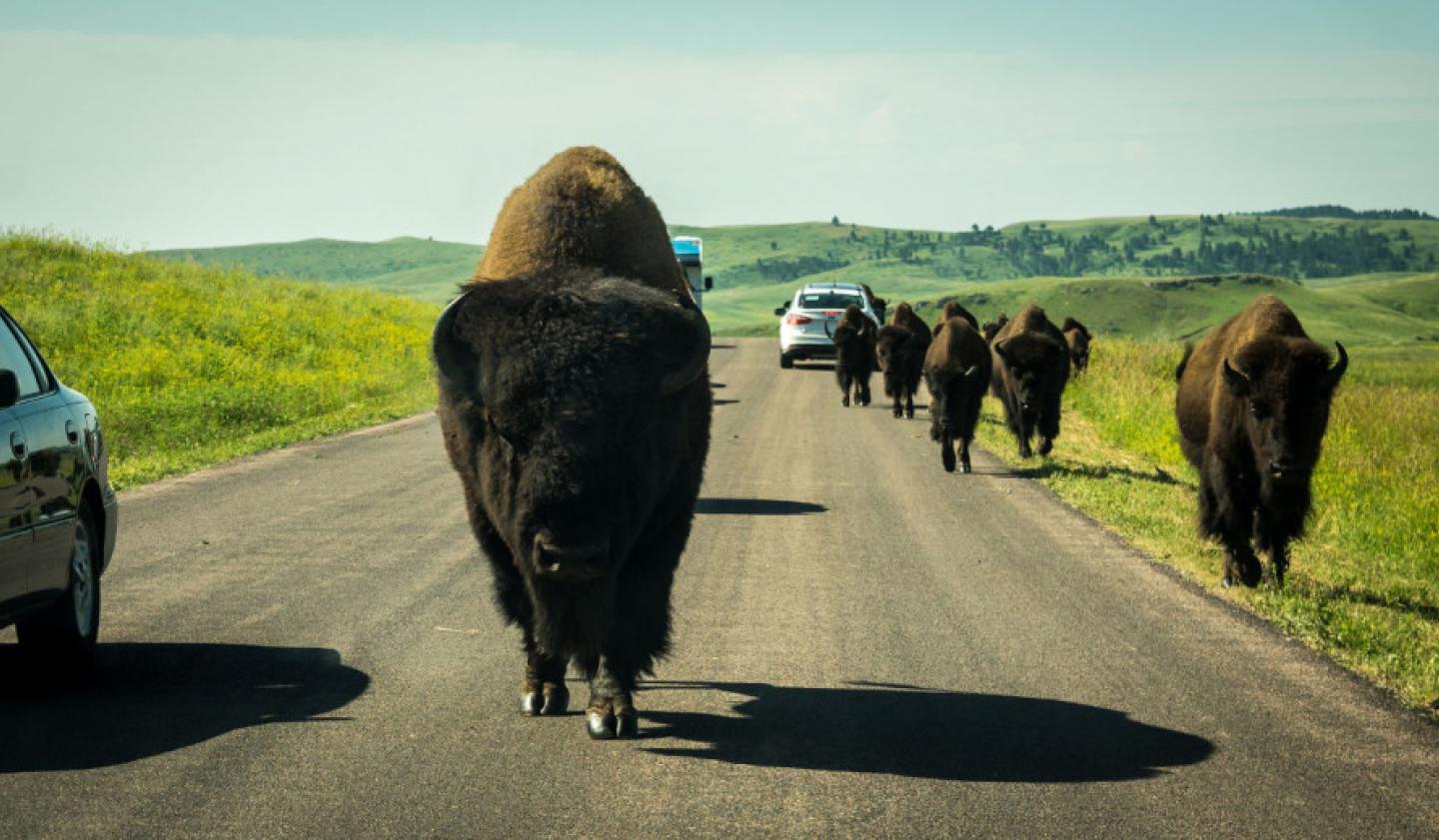 1. It has more miles of shoreline than Florida.

South Dakota might be located smack in the center of the US, but it still has more miles of shore than the beachcombers’ state. This is thanks in large part to Lake Oahe, a 231-mile-long reservoir along the Missouri River, but also many small lakes and tributaries of the Missouri. All that shoreline means more fishing, more swimming, more standup paddle boarding, more kayaking…

2. Harley-Davidson owners take over South Dakota every year for the largest motorcycle rally in the world.

In 2015, the Sturgis Motorcycle Rally held its 75th annual event in the Black Hills of South Dakota. Nearly 750,000 motorcycle riders stormed the highways and byways on the backs of Harleys and custom bikes. It’s a major party that transforms the otherwise tiny town of Sturgis, just up the highway from Rapid City, into a motorcycle rider’s paradise for one week every August.

Drive your car (or ride your motorcycle, if you’re visiting for the aforementioned rally) along this state park’s Wildlife Loop, where you’ll be within breathing distance of the bison. Respect their space, though, as the wild animals will charge if they feel threatened. All the same, a chance to creep along a road lined with roaming buffalo so close you can smell them is as all-American as you can get.

4. It’s home to the most attractive billion-year-old rocks around.

South Dakota’s deposits of Sioux Quartzite are red and pink in color and estimated to be as old as two billion years. They look good on the outside but hold fascination within as well — at Palisades State Park in the southeast of the state, the 50ft quartzite cliffs and spires looming over Split Rock Creek contain catlinite, a rare, soft mineral used by Native Americans for making calumets (peace pipes). And their sheer spires make the Palisades one of the best climbing spots in the state.

5. South Dakota was once covered by sea, and was home to three-toed horses, saber-toothed cats, and giant pig-like animals.

Expeditions in and among the surreal pinnacles and gullies of South Dakota’s Badlands have uncovered fossils from at least 175 different species of Oligocene life, including the 23-million-year-old remains of rhinoceroses and tapirs. In fact, Badlands National Park is considered one of the world’s richest deposits of mammal fossil beds in the world. And in 1990, the most complete specimen of Tyrannosaurus rex ever found was discovered in this part of the state.

Today you’ll see bison and pronghorn and bighorn sheep roaming the Badlands, as well as an animal that nearly went extinct: the black-footed ferret, which survives today thanks to a captive breeding program and reintroduction to protected places like this.

6. The craft brew scene is incredible.

South Dakota’s home to more than a dozen breweries, and they’re producing seriously fine beer. Crow Peak Brewing is the biggest; you’ll find its most popular beers — 11th Hour IPA and the dark, chocolaty Pile O’ Dirt Porter — in bars across the state, but it’s worth visiting their Spearfish taproom for the Canyon Cream Ales made with local honey. In Custer, Bitter Ester’s Brewhouse produces small-batch beers, and its kitchen also serves up epic homemade sausages and bison burgers.

The craft brew scene continues to grow all over the state. In the east, make sure to check out Fernson Brewing in Sioux Falls and Wooden Legs Brewing in Brookings. And back in Rapid City, don’t miss Hay Camp Brewing and Firehouse Brewing — founded in 1991, the latter is the oldest operating microbrewery in the state and is located in the city’s original fire station.

7. The highest summit east of the Rockies is in South Dakota.

At 7,242 feet above sea level, Black Elk Peak (formerly known as Harney Peak) in the Black Hills gets you the same views the stone presidents at Mount Rushmore see (they’re located just three miles down the road). After you’ve explored Black Elk Peak and the old fire lookout tower at the top, make a loop through the Needles’ granite spires on your way to the most famous landmark in South Dakota — yep, we’re talking about those presidents again.

Then, 17 miles east in nearby Custer County, visit the Crazy Horse Memorial. Dedicated to the legendary leader of the Oglala Lakota, the massive monument has been a work in progress since 1948, and it’ll be the largest mountain carving in the world when completed.

In fact, you can partake on both sides of the state: in the Black Hills and at Great Bear Recreation Park in Sioux Falls. South Dakota’s an ideal place for beginners interested in getting their skis or snowboards slick — the prices are way more affordable than the Rockies, and you won’t have to stand in those long lift lines.

9. We have Big Sky Country here too.

From the winding canyons and granite peaks of the Black Hills to the rainbow-hued spikes of the lunar-like Badlands, South Dakota is nothing if not diverse. But it’s the prairies’ vast seas of grass that can bring out the deepest sense of wonder — the sunsets are just bigger here, with geese silhouetted against the sky as streaks of gold and red spill out over the horizon.

11. You can explore one of the longest and most complicated cave systems on the planet.

Named after the howling barometric winds at its entrance, Wind Cave contains 132 miles of mapped passages, and they’re incredible. The boxwork mineral structures look just like colorful popcorn…60 to 100-million-year-old popcorn, that is. It goes without saying that this complex maze of passages is popular with spelunkers, but Wind Cave is also a sacred site for many tribes, including the Lakota people; per their creation story, it’s where Mother Earth breathes life into the world.

And you can sleep in a covered wagon there, Little House on the Prairie-style. The town also has a one-room schoolhouse where you can wear a bonnet and play school, make a corn husk doll, and pretend to be a little Wilder.

13. Spearfish Creek flows so fast it freezes from the bottom up.

This is not normal. However, the water of Spearfish Creek — located just north of Deadwood in Spearfish Canyon, where fly fishing is all the rage — is speedy quick. It flows too fast to freeze normally; instead, the friction generated between riverbed and water causes it to freeze, accumulating ice from the ground up.

14. And you can literally get frozen in your tracks here.

Spearfish also holds the world record for having the greatest change in temperature in the shortest amount of time. On January 22, 1943, the temperature went from -4 degrees to 45 degrees within two minutes — that’s a 49-degree change in just 120 seconds.

The cause? A chinook — a warm Pacific wind that rushes over the mountains into the interior regions of the Northwestern US. The results in ’43 caused South Dakota windshields and windows to frost and crack, but generally chinooks provide a lovely respite from the winter chill.

15. The stargazing is amazing.

South Dakota covers over 77,000 square miles, and given that it’s one of the least populated states in the US, there’s minimal light pollution. Translation: epic views of the night sky. On moonless nights, the Milky Way is clearly defined among the thousands of stars visible with the naked eye, especially in Badlands National Park, which features some of the darkest skies in the nation. The park hosts astronomy festivals every year, where you can get magnified views of the planets and nearby galaxies using the park’s telescopes.

16. The honor system is alive and well here.

Hiking among the spruce and ponderosa pine forests of the Black Hills, swimming in clear, glacial lakes — that’s summer in South Dakota. As are the unattended carts and stands laden with corn, tomatoes, and other local crops throughout our towns. Popping a few dollar bills in a metal box and carrying away a bag of fresh, local produce — there’s nothing quite like it for restoring your faith in the world.

Next Up: Sip, Socialize and Sight-See: A Winery Tour of South Dakota